It all started with Dave Weber’s drill press.

After last Winter (2016) I thought I should build a little rack to stack the firewood in our crowded basement. This was from a neat plan in Popular Mechanics magazine. Among other things it required some easy metal working. When I asked my friend Dave what drill bits would best drill through metal he said: “Here, I have this old drill press. Do you want it?” After taking the big, heavy hunk of tool home I realized that it would have to be taken apart, cleaned, oiled and then some. Over the course of a few mild days in March I carried the machine, in various stages of disassembly, outside to do the thing and then back in before it turned too wet or dark. After it was all put together it looked (almost) like new and worked – but where was I going to put it? The large basement room, which was supposed to be a rehearsal and ping-pong facility, was already full of saws, computers, a CNC machine and wood scraps of varying sizes….

This is the point in time when I knew I needed an external workshop where I could paint, and make a mess and noise year round.

Not that it was such an original idea. A few years earlier I had toyed with the idea and even staked out a small plot next to the garden shed. But that project then fell by the wayside because it looked for a time that we might actually move and sell our house. But the stakes and the marker lines where still there – I mowed around them every time I cut the grass. 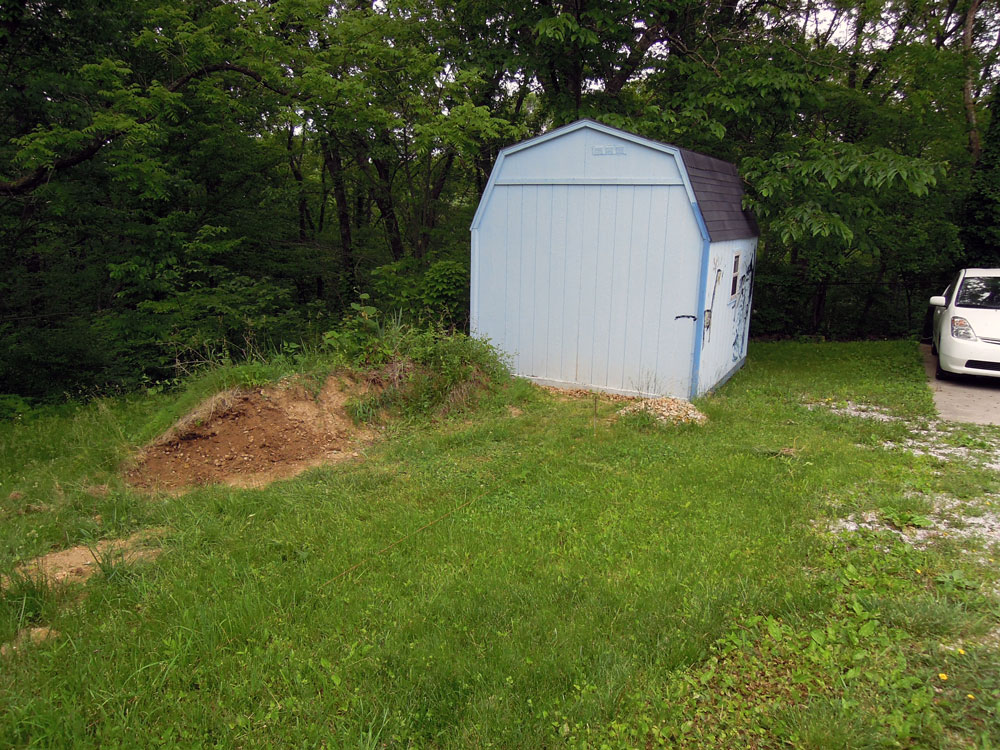 Like with every project of that size I dreaded getting started. Like the kitchen remodel from 2012, once you start you have to finish. And this one would be seen by every one of our neighbors. Nevertheless, in late May 2016 I broke ground. The first holes on June 30, 2016…. 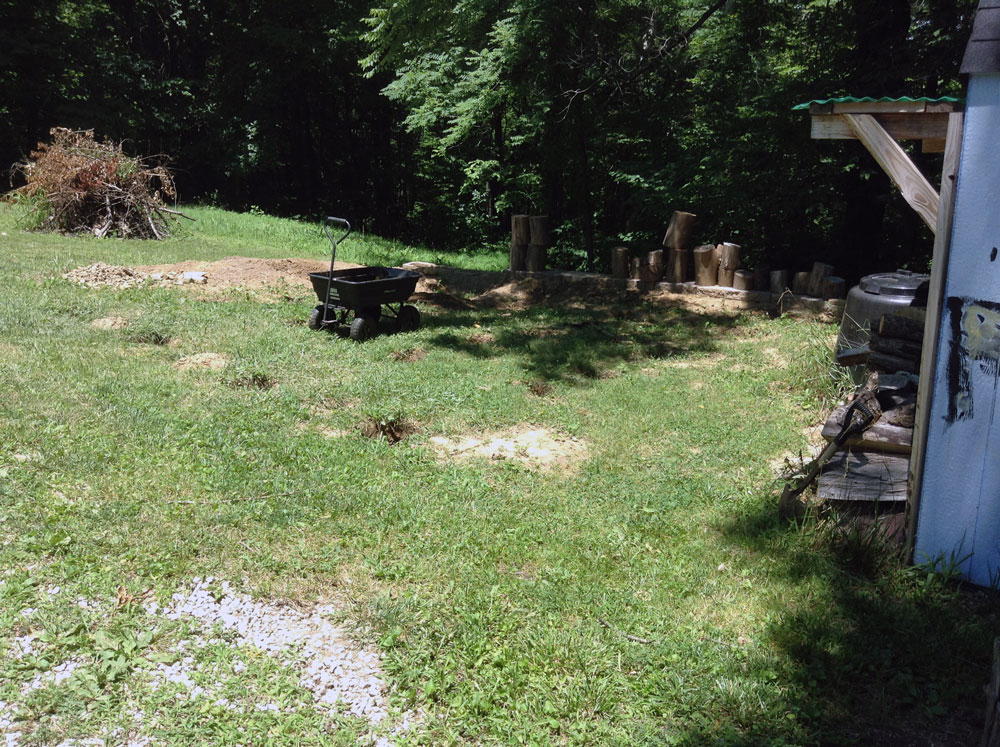 2016 turned out to be a dry Summer and work progressed quickly. My wife Monika left for a longer stay in Europe in early June while younger daughter Jasmin and I were to follow for a two week stay on July 16. The plan was to have the foundation done and concrete poured before the trip and finish after in August.

July 1 saw me setting and aligning posts. At that time I hadn’t really planned the rest of the structure. Rather I thought I was roughly going to follow a plan from an issue of MAKE:, which called for a 12×16 foundation. My maximum size was 12×14 feet and I hoped to adapt their plan. 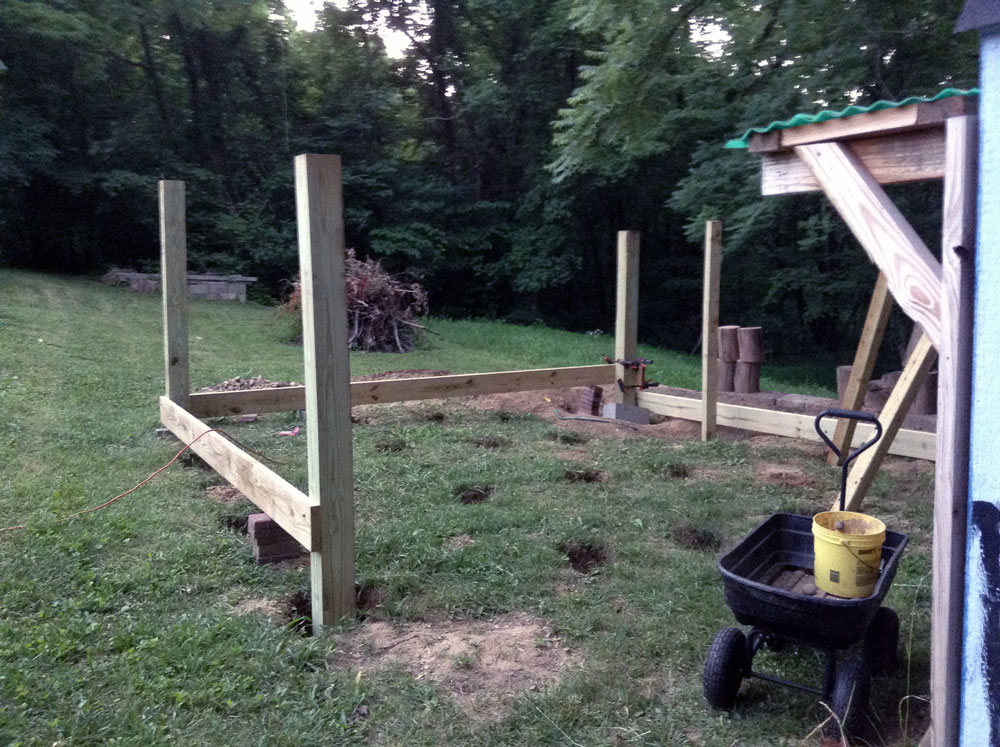 July 5. If I could travel back in time I would tell myself that these holes really should be better aligned. Boards and panels are 4×8’ for a reason and your foundation should take that into account. 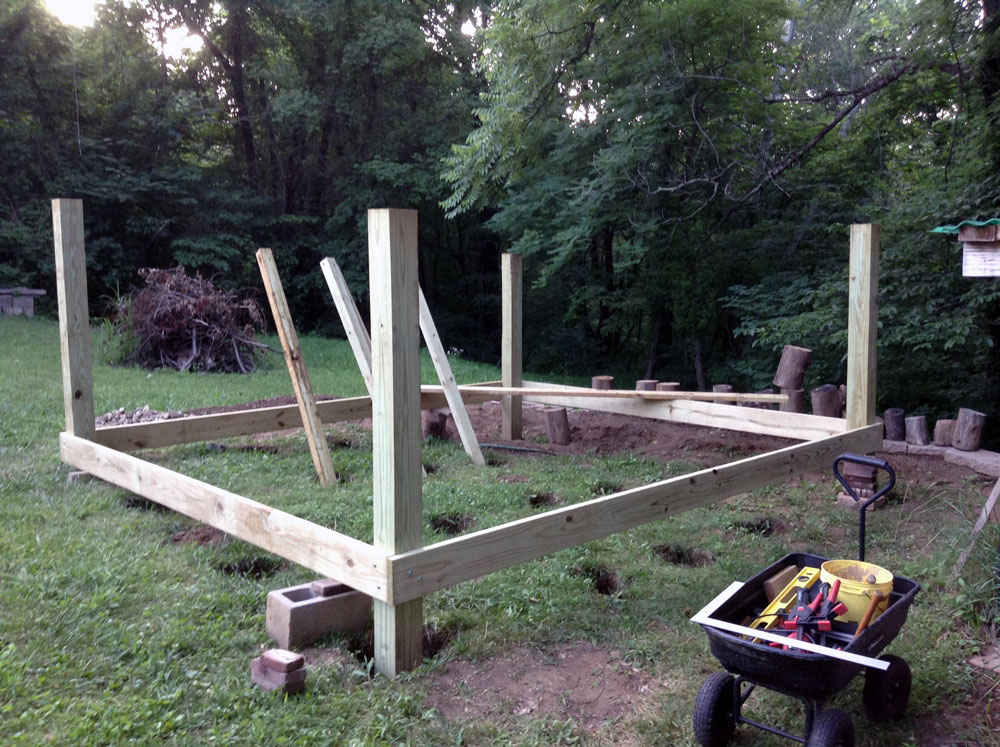 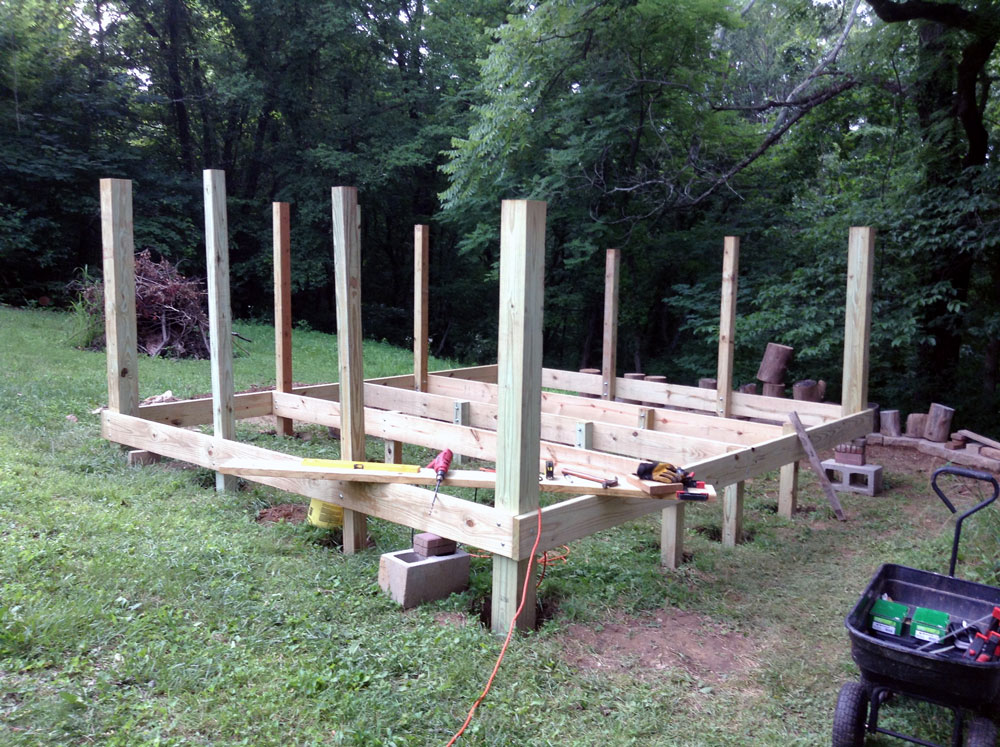 July 12, the evening before the cement delivery, I realize that I also need some sort of stairs. Extra digging ensues. 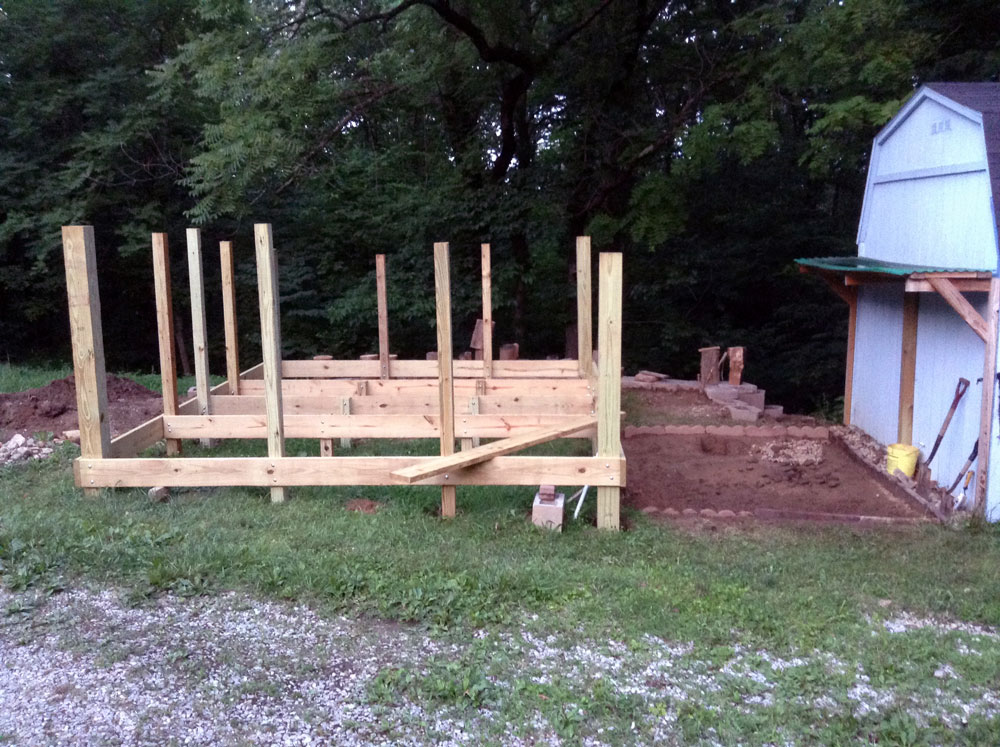 July 13, morning. One last picture before cement truck covers everything. 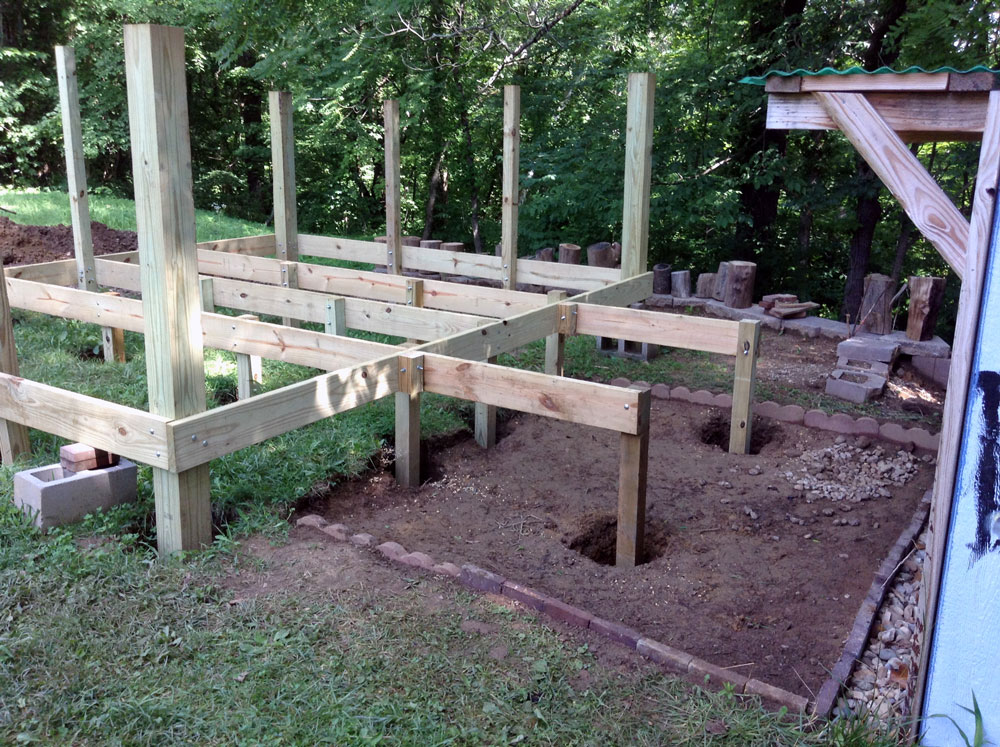 July 13, afternoon. Why would I use long 6×6” and 4×4” posts that would make it nearly impossible for the cement truck operator to navigate the chute through – in the process throwing off my careful alignment? I had finally decided to not go with the MAKE: plans. They were using some sort of arch/girder system to make sides and roof. It would have required 11 of these pieces in my structure. Each piece comprised of four large OSB side pieces cut from a 4×8′ panel by a huge CNC machine (or a hand saw?) This would have been 44 large, complicated pieces, cut by hand. Glad I abandoned that idea. I was going to go with a more normal framed structure. But I wanted to incorporate the foundation posts, at least the 6×6″ corners. And now they were knocked out of alignment. 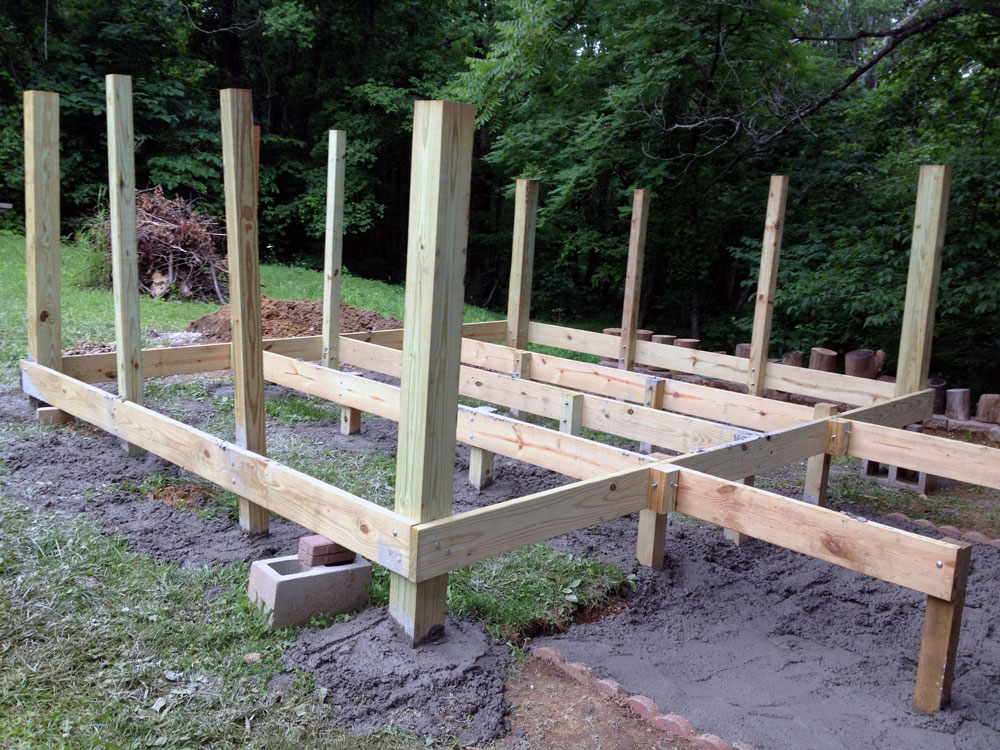 July 13, evening. Our little puppy Joy looks at the mess (construction site and constructeur).  That day, with the frantic last minute hole-digging and 90 minute non-stop concrete pour did me in. I haven’t been drinking much alcohol since a few years, but I thought I would drink a cold one that evening – and promptly passed out on the couch. 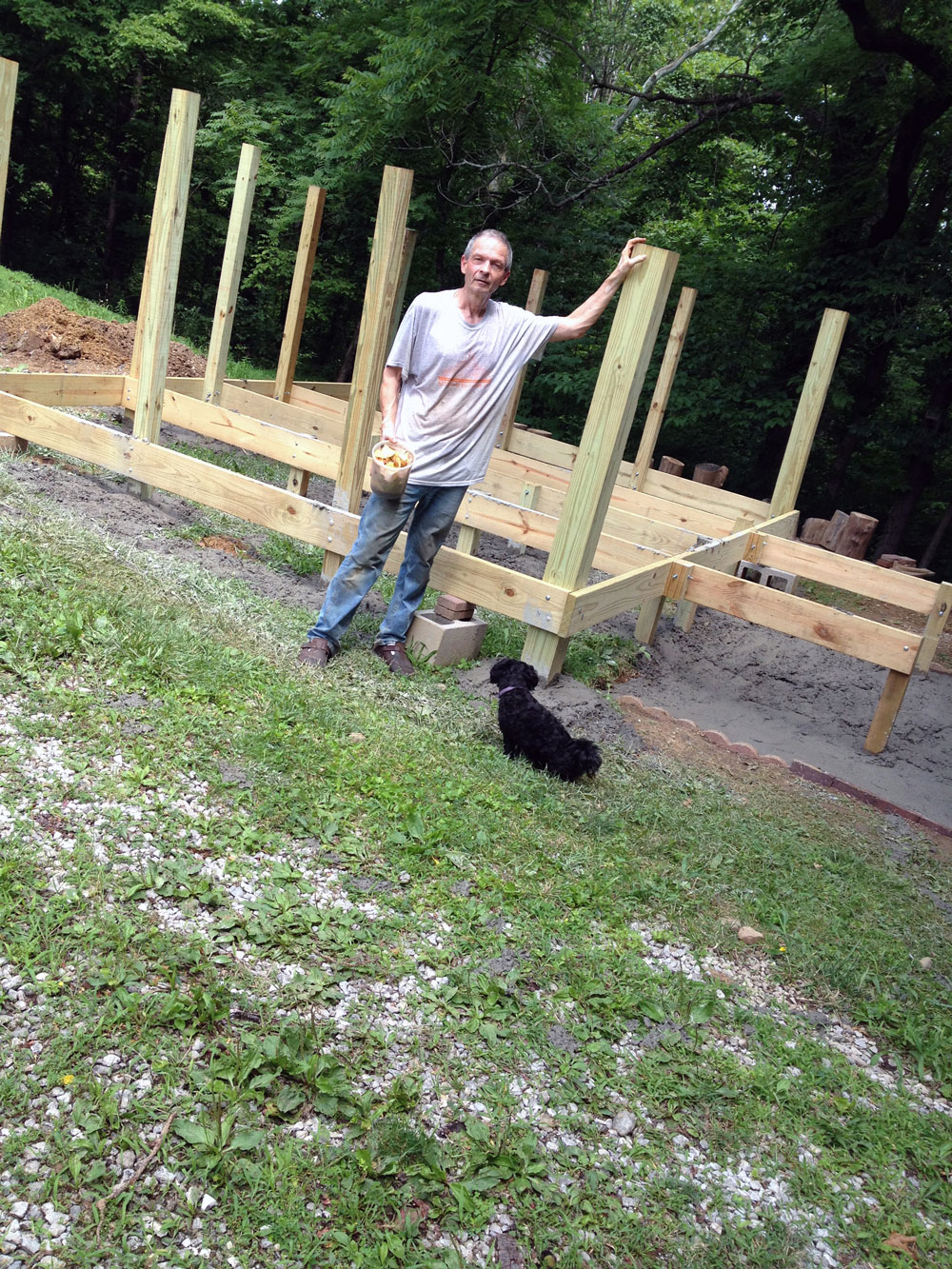 Two days later off to Germany. We’ll deal with the kinks when we come back.

To be continued in Fringelab, part 2……..