Even though you sometimes see buildings and trailers wrapped with this Tyvek stuff exposed for longer periods – maybe the funds ran out before adding the siding – I liked to have a little more protection from the elements. As per recommendation by my good friend and indispensable advisor Dave Weber, I decided to use cement fiber board. I borrowed the truck once again to get a load of 4×8’ plywood panels for the interior and about 50 7”x14’ cement fiber planks. I thought loading these on the truck would be easy. But they are just about 6′ longer than the truck bed. And these panels are very elastic – or “floppy”. I wasn’t worried I would loose my load like a few months ago but going through potholes the boards would swing vertically enough to touch the road. But I made it home.

The key, again, was to figure out a way how to hold these 14’ boards up with one hand, at the correct vertical distance to the previous board, and keep it straight, while being high on a ladder – and then lift the nailer and pull the trigger… My muscles were very sore for a few days (I lost about 8 pounds of weight, too.)

October 11. Installing siding on this wall was relatively easy. No openings. Just straight up. You should always start with the easiest task, right? 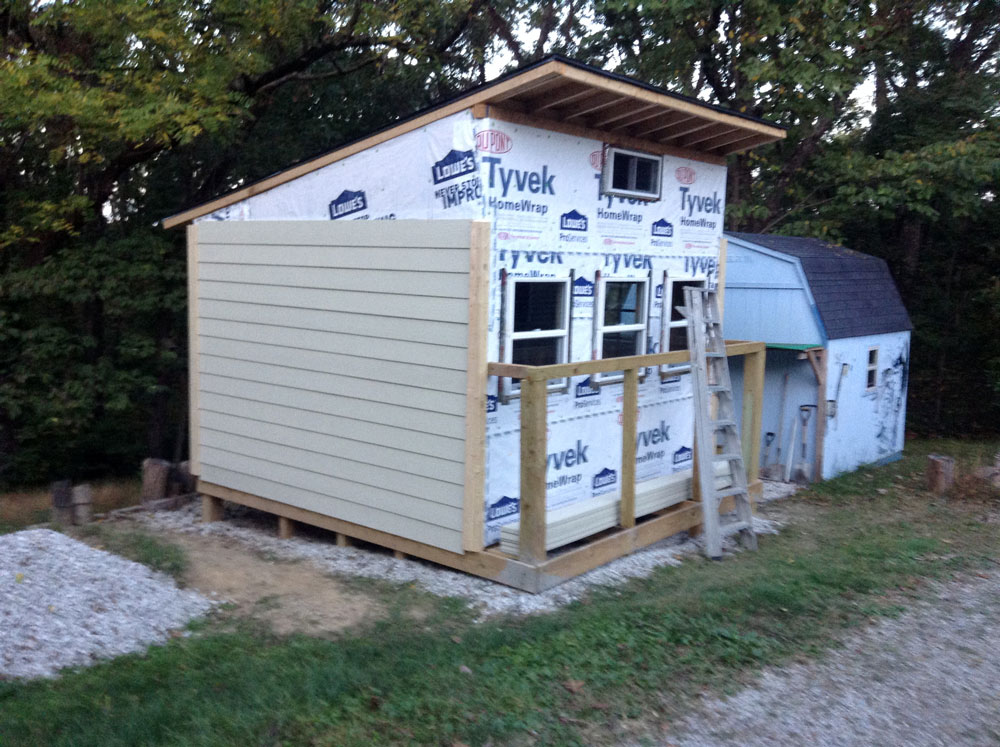 October 12. Cutting and installing these window frames on a good old miter saw was such a relaxing job in comparison. 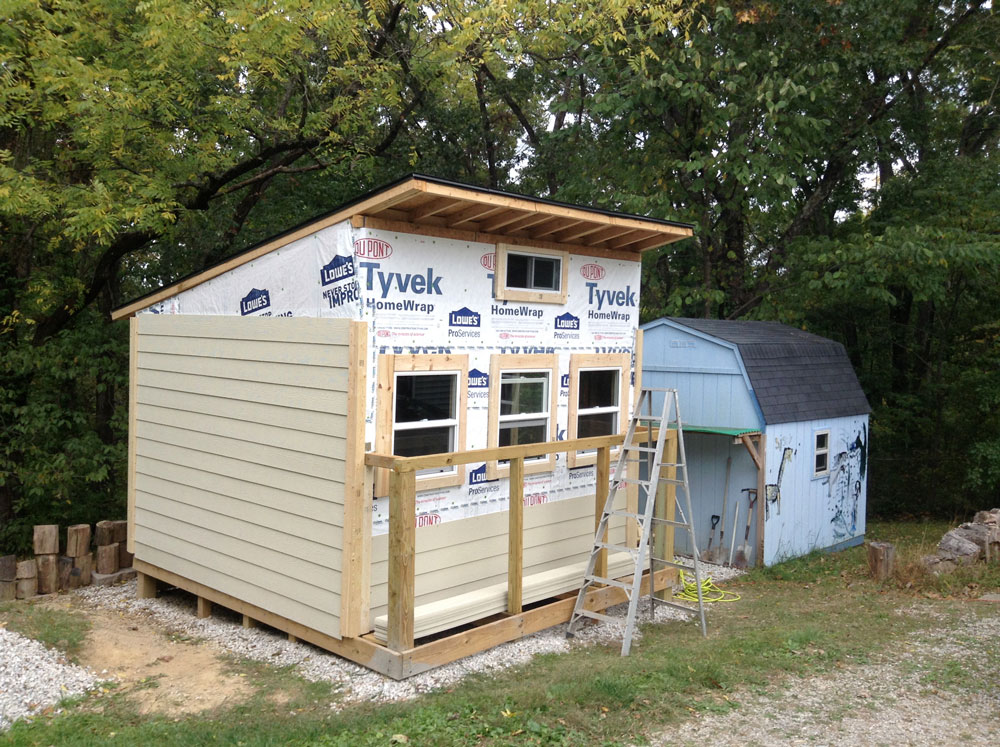 October 18. Monika was already on her Europe trip but I think the kids wouldn’t have been surprised to see me walking around in the house like that. 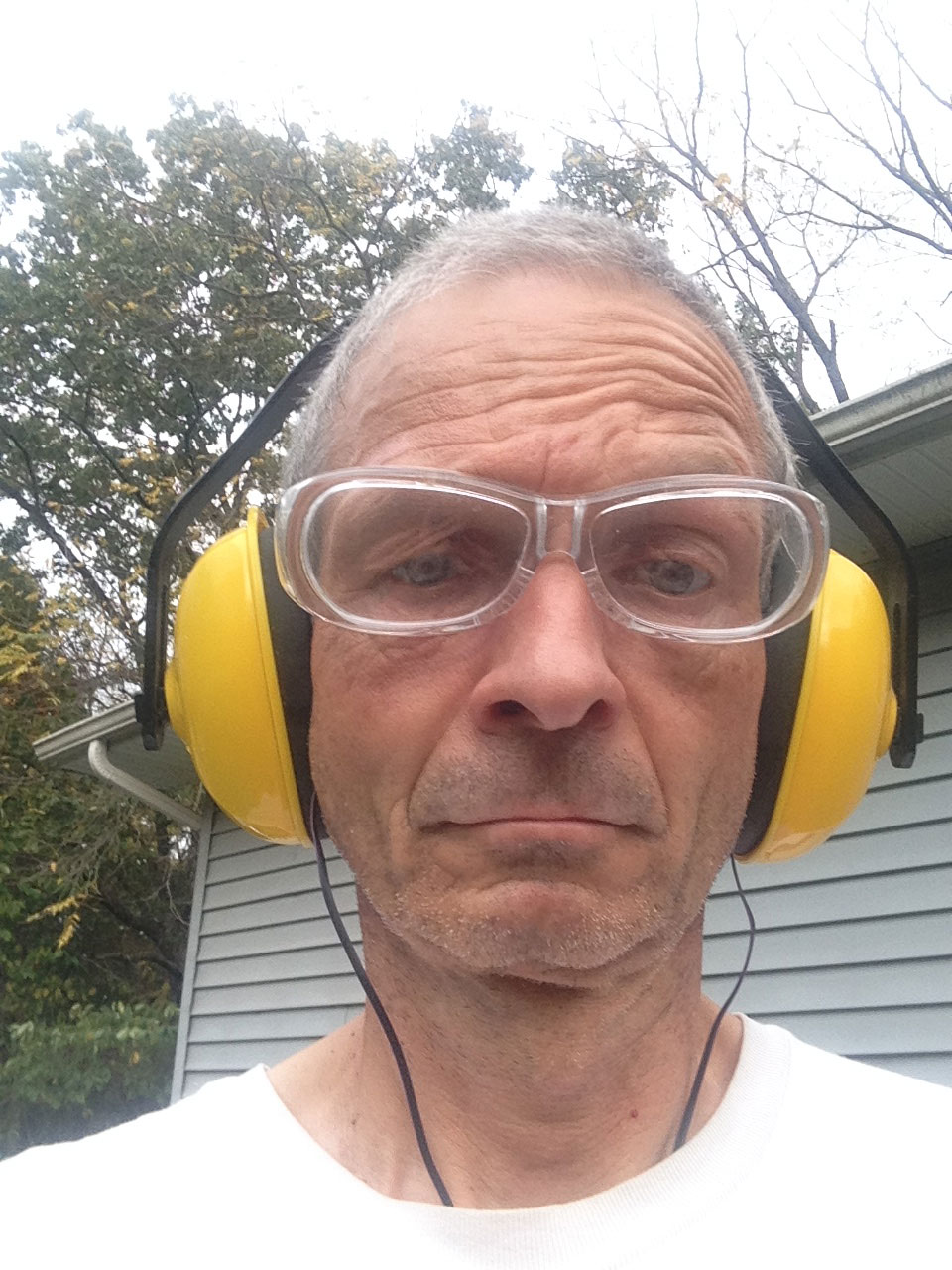 Of course there is always something that doesn’t quite line up. That’s when you improvise. 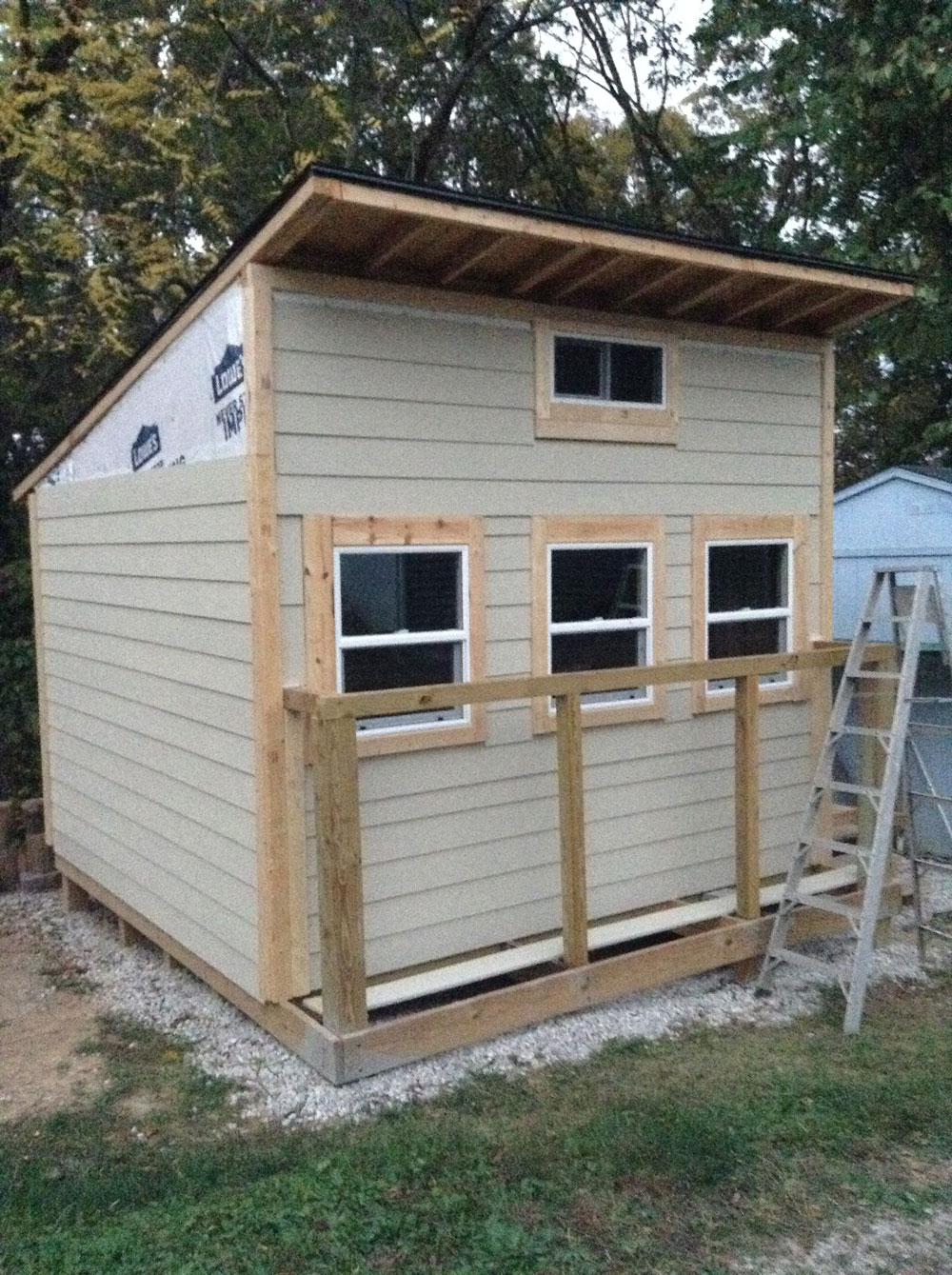 October 29. Most of the extra crucial exterior stuff was done and I started adding insulation and interior panels. I thought about using drywall but considering that I would attach countless racks, holders, shelves and other stuff to the walls plywood panels seemed a better choice. 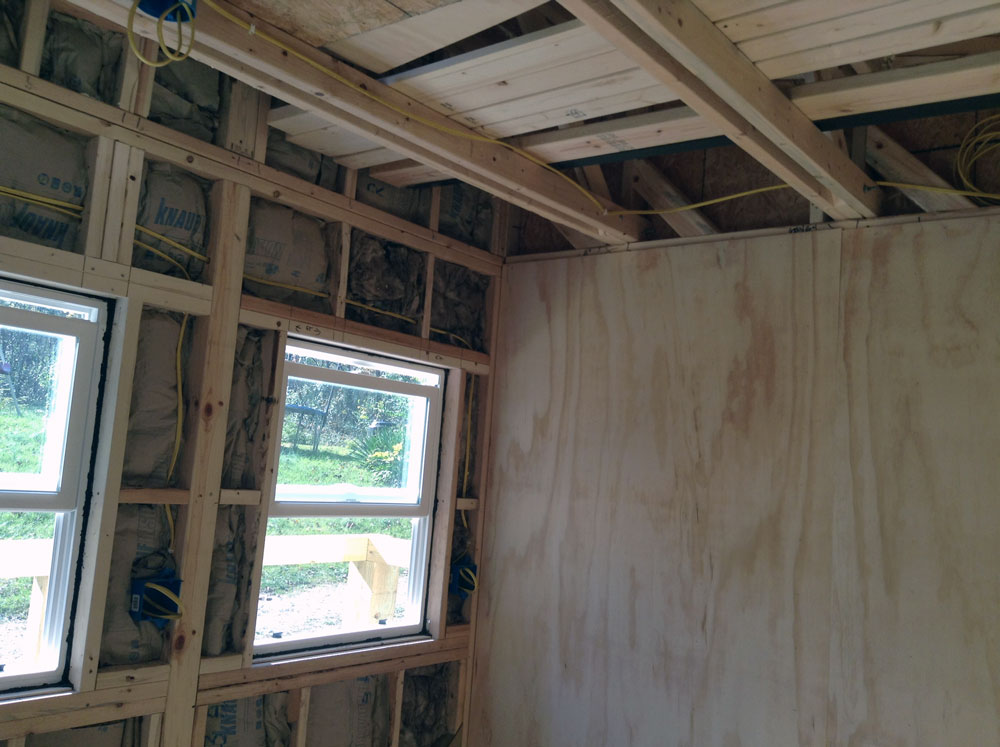 Wes and his assistant, my electricians from Atomic Electric, had already laid cable and installed boxes for the outlets, light fixtures and switchbox. In the picture below you can see my desperate attempt to fill some gaps with insulating foam. I guess this is easier when used with a sprayer machine of some sort but doing it through the flimsy plastic applicator that comes with the can is an insult. 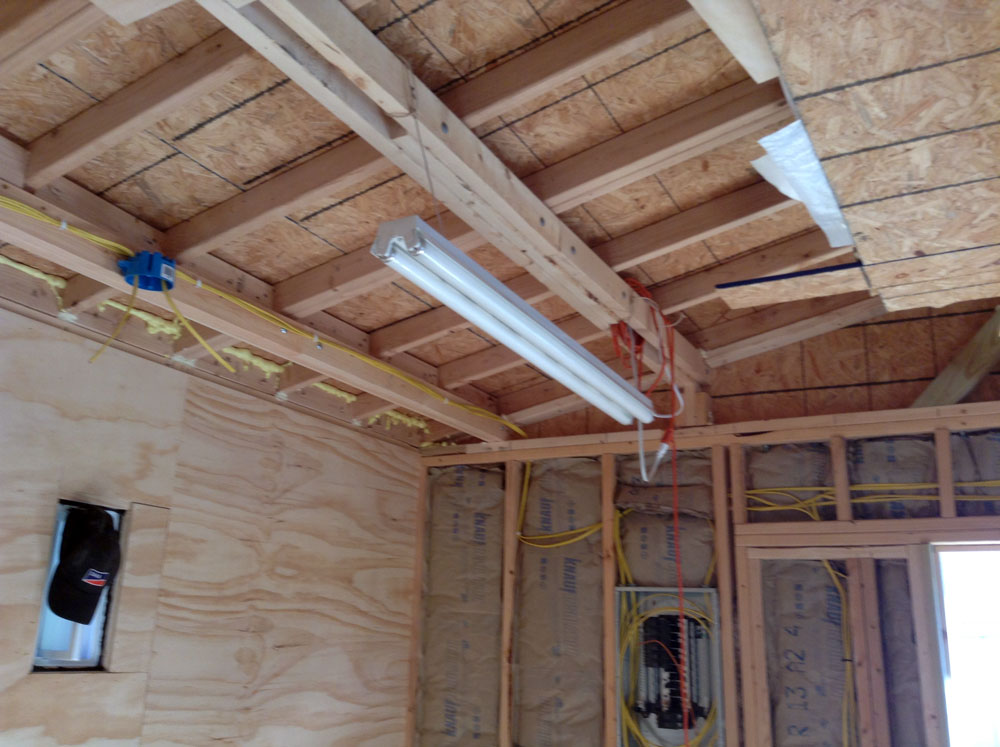 October 31. The final wall was paneled on Halloween. I used wood filler in the gaps. Hoping that Atomic Electric would soon have a day to connect the power so I could stop using that long extension cord. 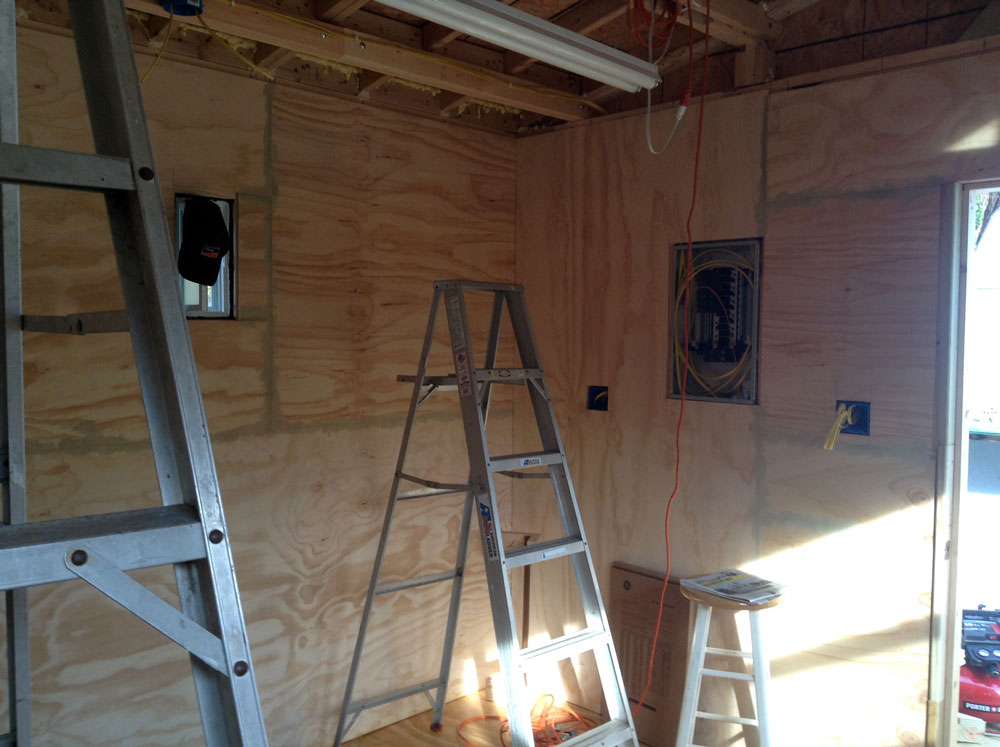 November 4. As long as I had been putting off starting this project, late Summer and Fall 2016 proved to be the right time. Probably due to global warming (I regret to say) there was an abundance of warm, dry days. Rarely did I get a break due to the weather.

I didn’t originally intend to build a little roof over the entrance but I thought it would be easier to add the bracing now rather than later have to break through the siding. 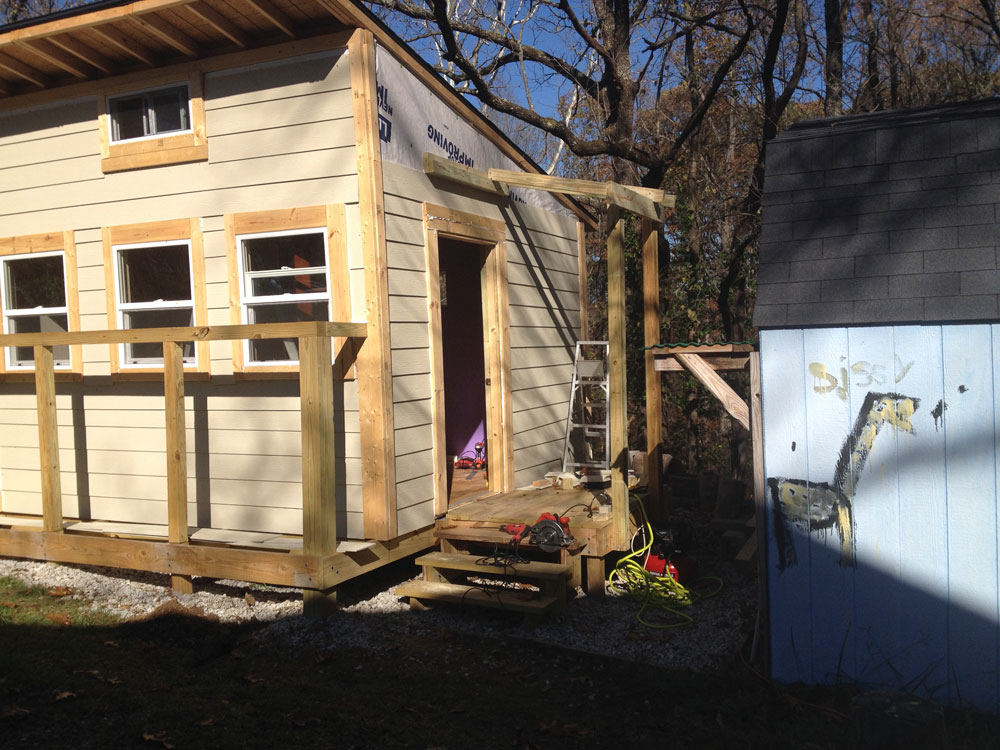 At this point all the interior wall paneling was installed and painted. I found out that our local recycling center takes buckets of unused paint that you can pick up for free. Well, they had one white and one purple bucket. It was free. And it’s a nice color combo. I also added some cheap trim to the corners and the base of the walls. Just looks cleaner. 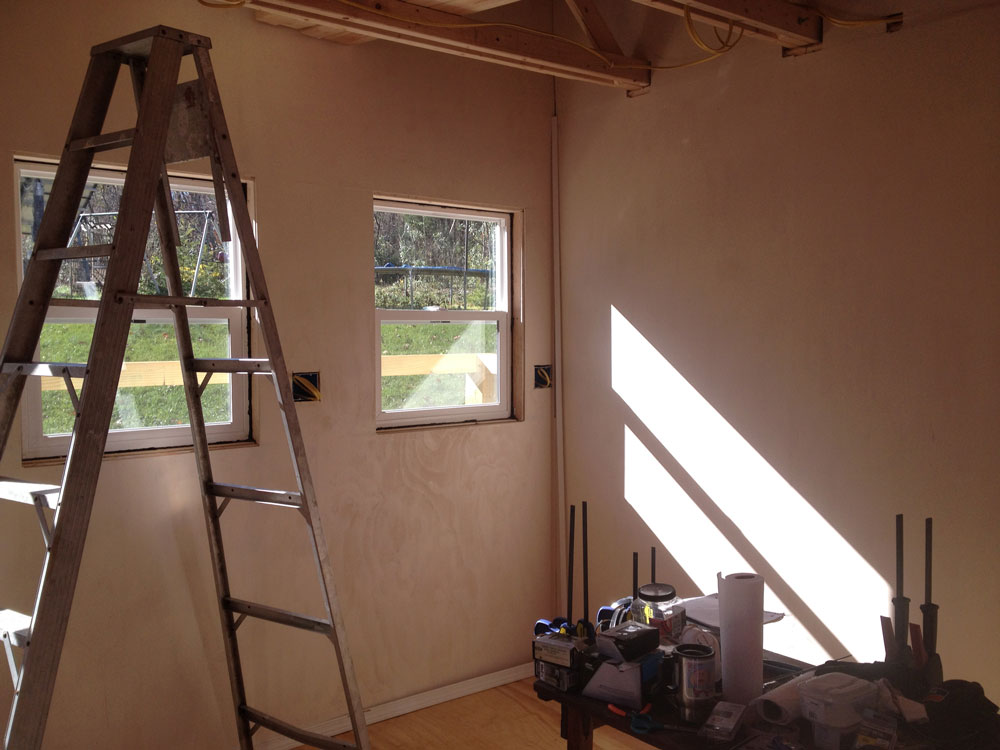 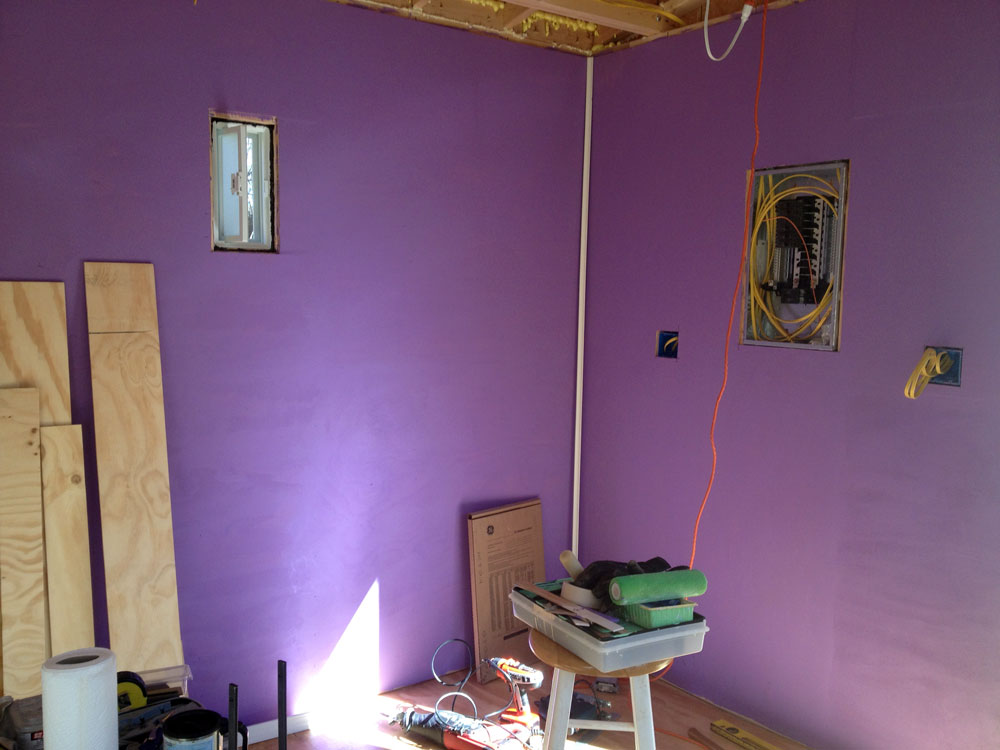 November 10. Major milestone. Two days earlier Atomic Electric finally had a day to swing by for the final electrical installation. This workshop is geographically at a nice sunny spot on our property but also exactly on the opposite side from where the power lines connect to the house. At first I was afraid I would have to dig a trench for the cable all around the house. But there is so much growing, especially some larger trees with big roots. It would have been a nightmare. So we decided to run the cable in a pipe along the underside of the deck in the back of the house, then along the side wall and finally through a relatively short 20’ trench under the driveway. Trenching under the driveway was hard enough. Very rocky and well compacted soil. My whole body was aching, but especially my hands. I tried to play a little guitar that evening but had no fine motor control left in my fingers.

Then Zack helped me move the workbench from the basement to the workshop. It wasn’t long now. Not October, not November, but it would be done before Christmas. 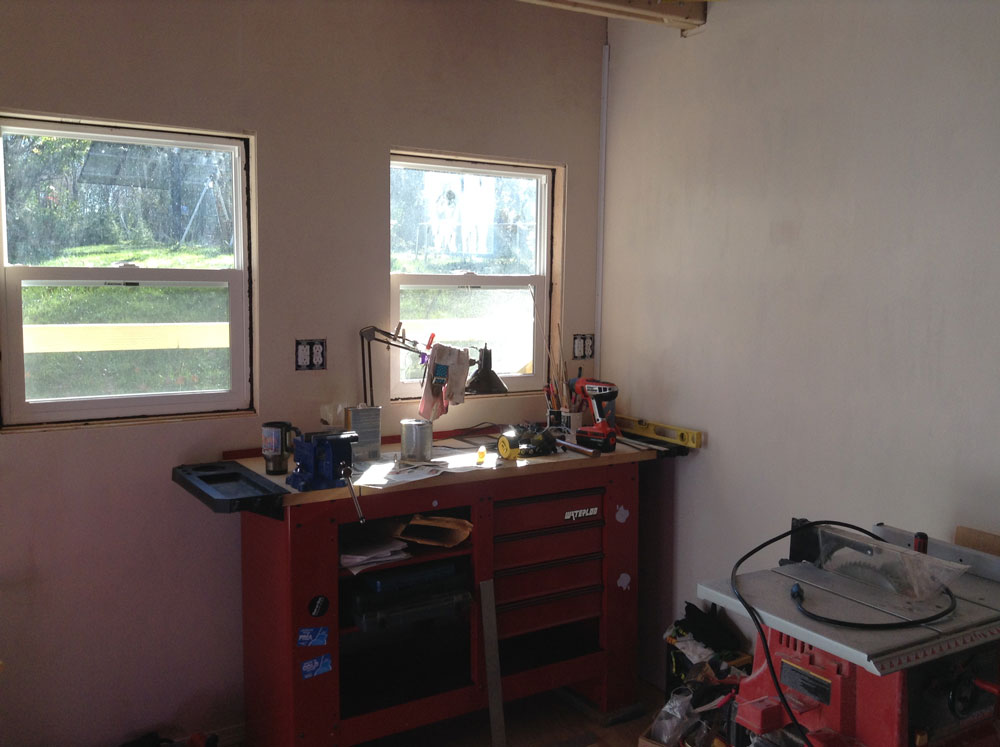 November 15. One of the last things before a full move-in was insulation in the ceiling. There had been a few colder days and the little radiant oil heater I had to keep the place warm worked fine but you could tell that a lot of heat was escaping through the ceiling. So insulation it was and since you can’t leave that exposed I needed some sort of ceiling. More improvisation ensued. But who ever looks up? 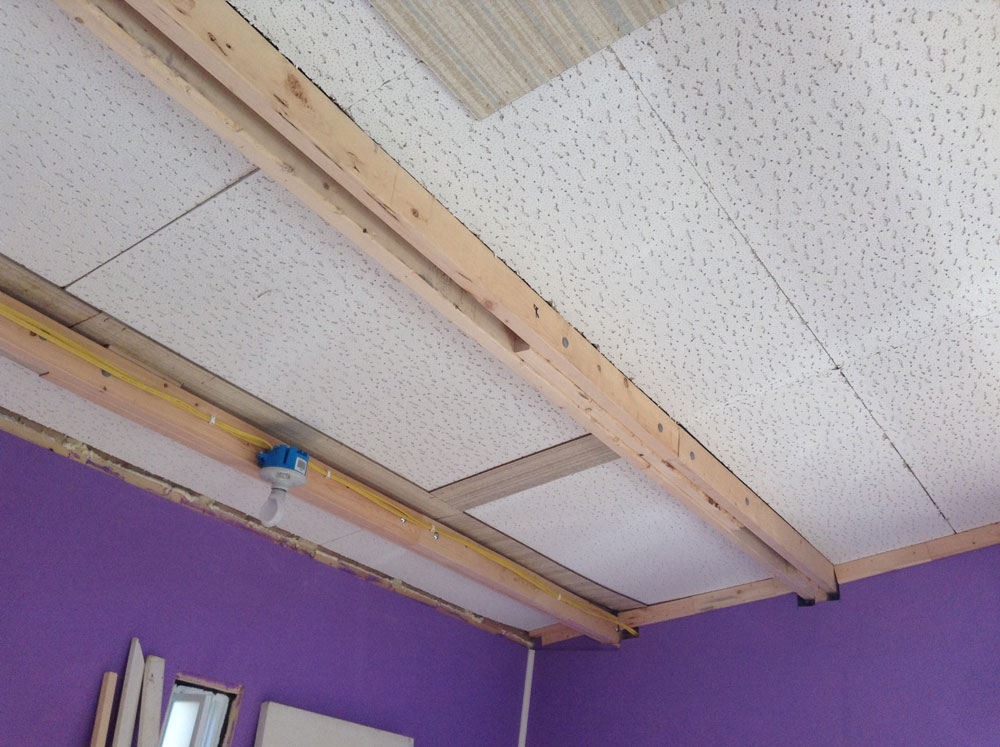 November 24. By Thanksgiving break I had most of the bigger machines and tools in the workshop. Including the CNC rig. I wanted the basement to look nice and clean for Monika’s return from Europe. While the mechanical part of the CNC setup worked I had just updated the Dell PC I use to control the CNC machine, which has the hot name Fireball, to a newer and different flavor of Linux. The Fireball control interface needs a computer with a parallel port and these old Dells still have them (I have two of the same type, with Linux they are quite usable.) Since the workshop is in clear line-of-sight of my office there is great Wifi reception out there but after the upgrade to Debian Wheezy neither of the Dells wanted to use Wifi. Another few afternoons of research and reinstalling. As so often the cause was obvious once I figured it out. As much as I love Linux but troubleshooting it sucks. 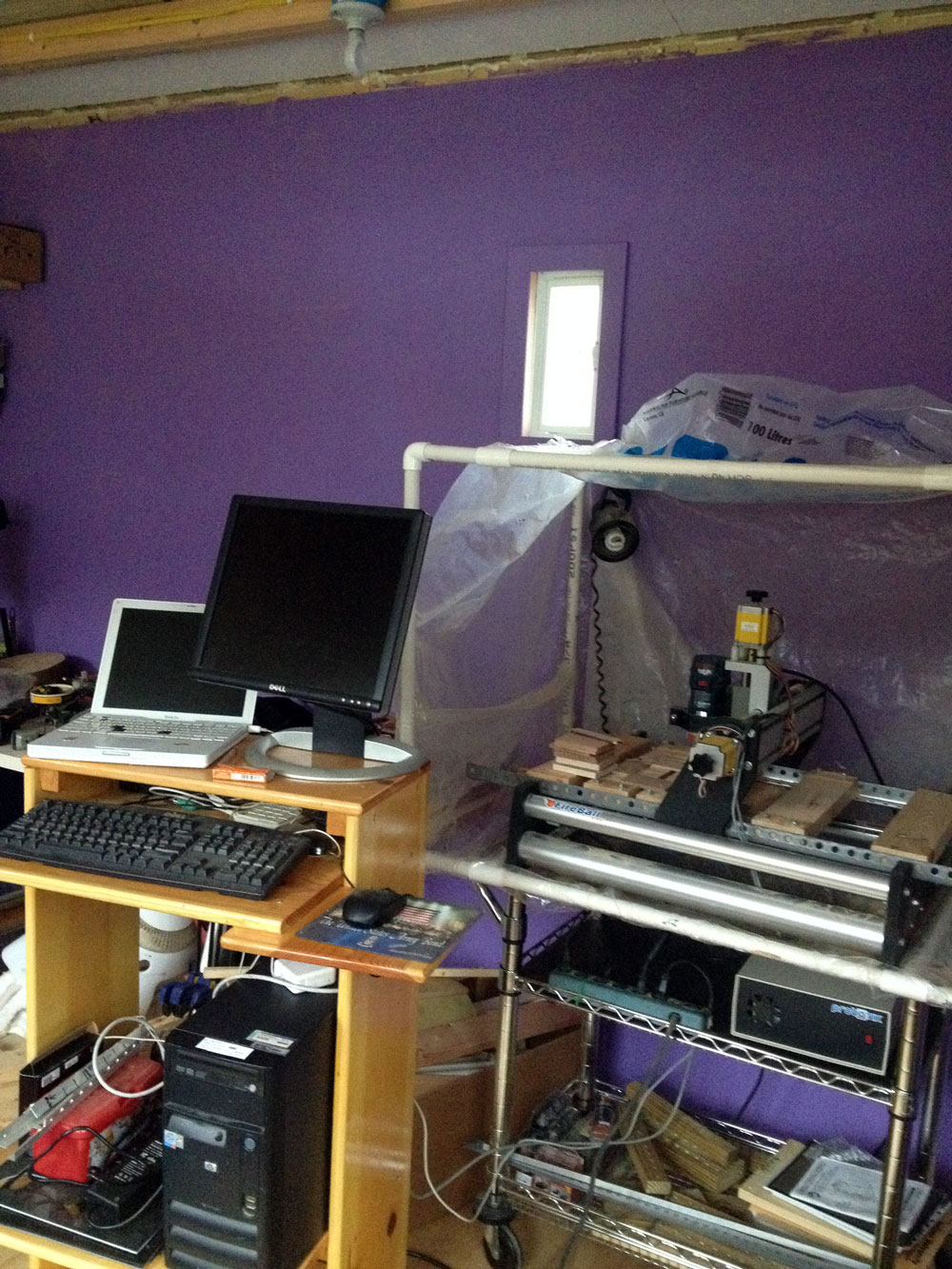 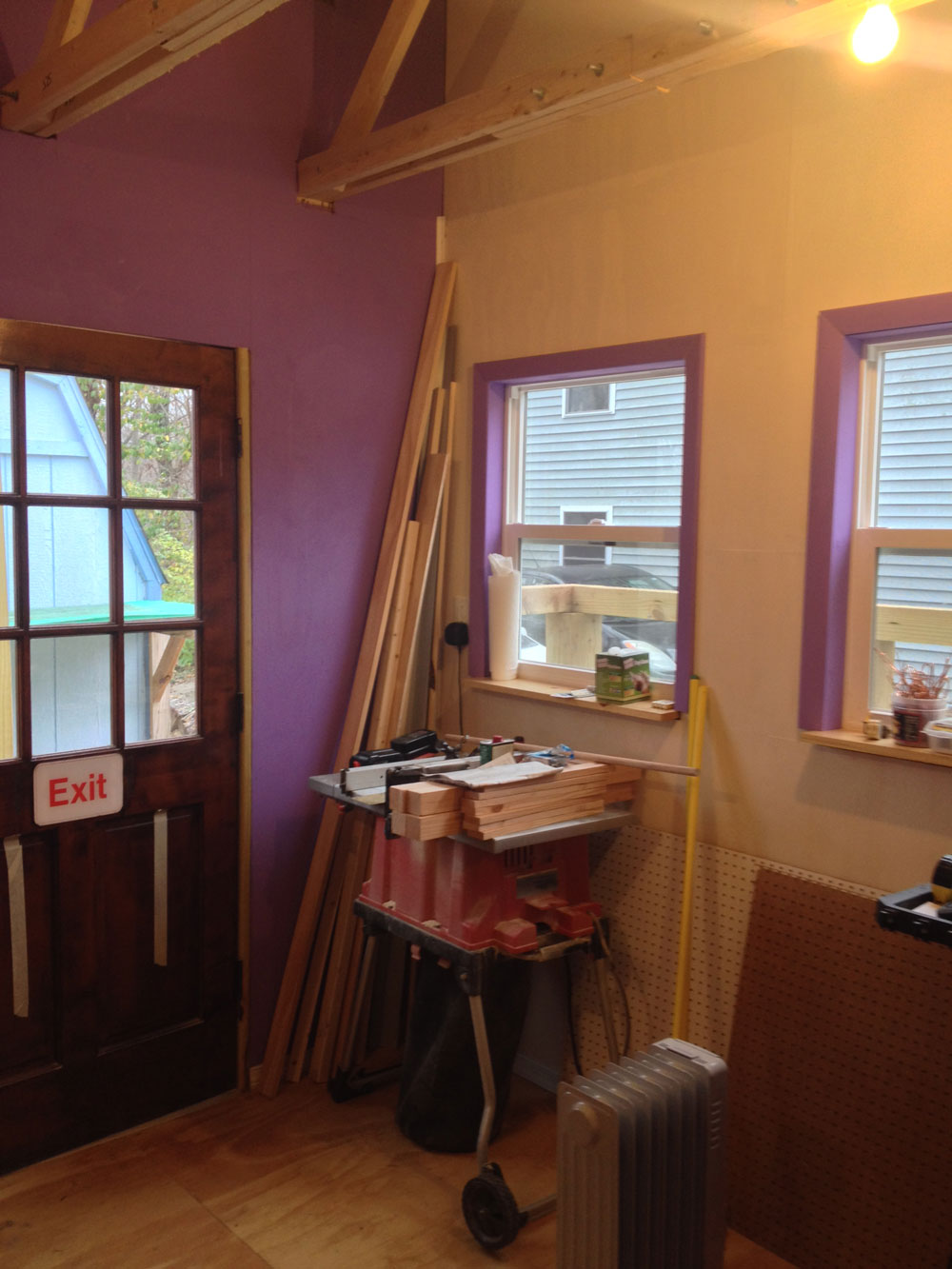 I still have to build and install lots of storage for tools, materials and all the stuff. The top of the workbench should really be free of all that crap. But for now it feels like home. 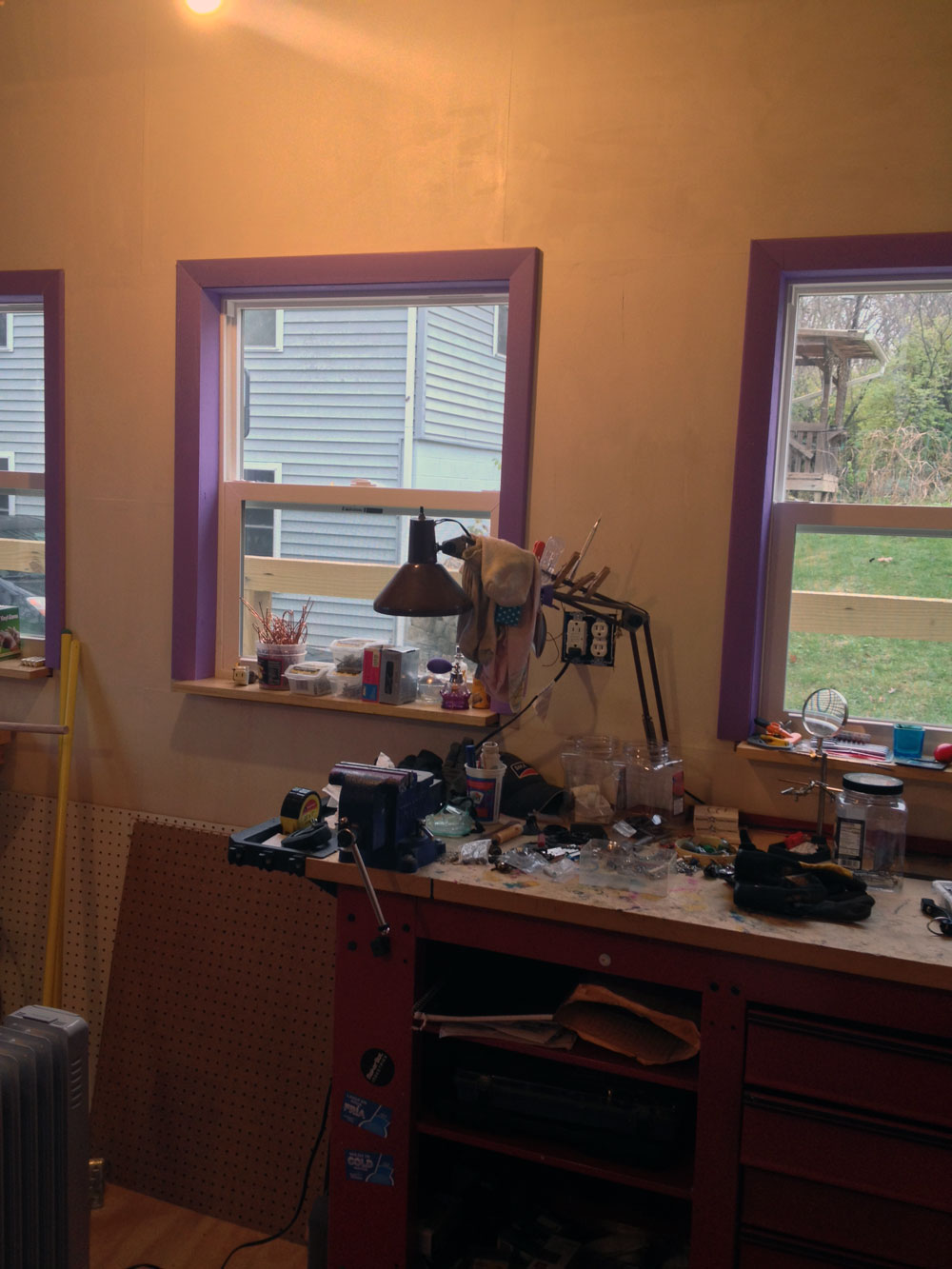 November 28. While there is still some stuff to cover on the outside, painting the outside, maybe installing that little roof over the door…. But this day Fringelab is officially done and ready for full usage. 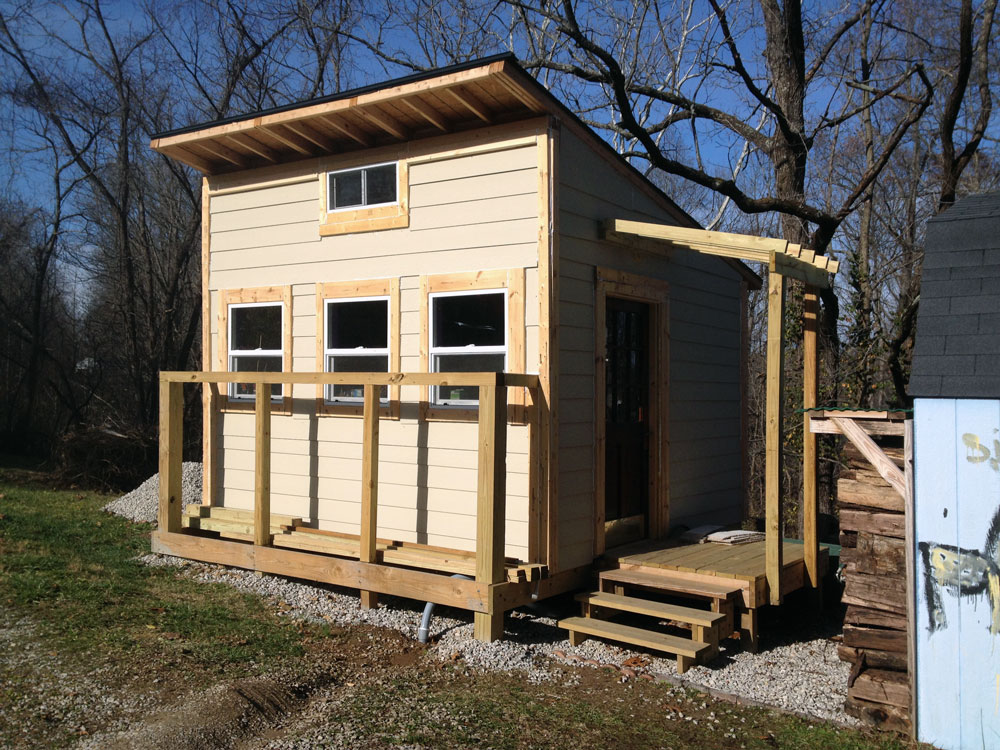 What looks like playful decoration, the red thing under the ceiling is a hammock. Tried to nap in it but it’s a bit uncomfortable.

November 29. And here is the simple firewood rack I started building earlier in the year, finally finished. The circle closes. The project is done, what do I do next? 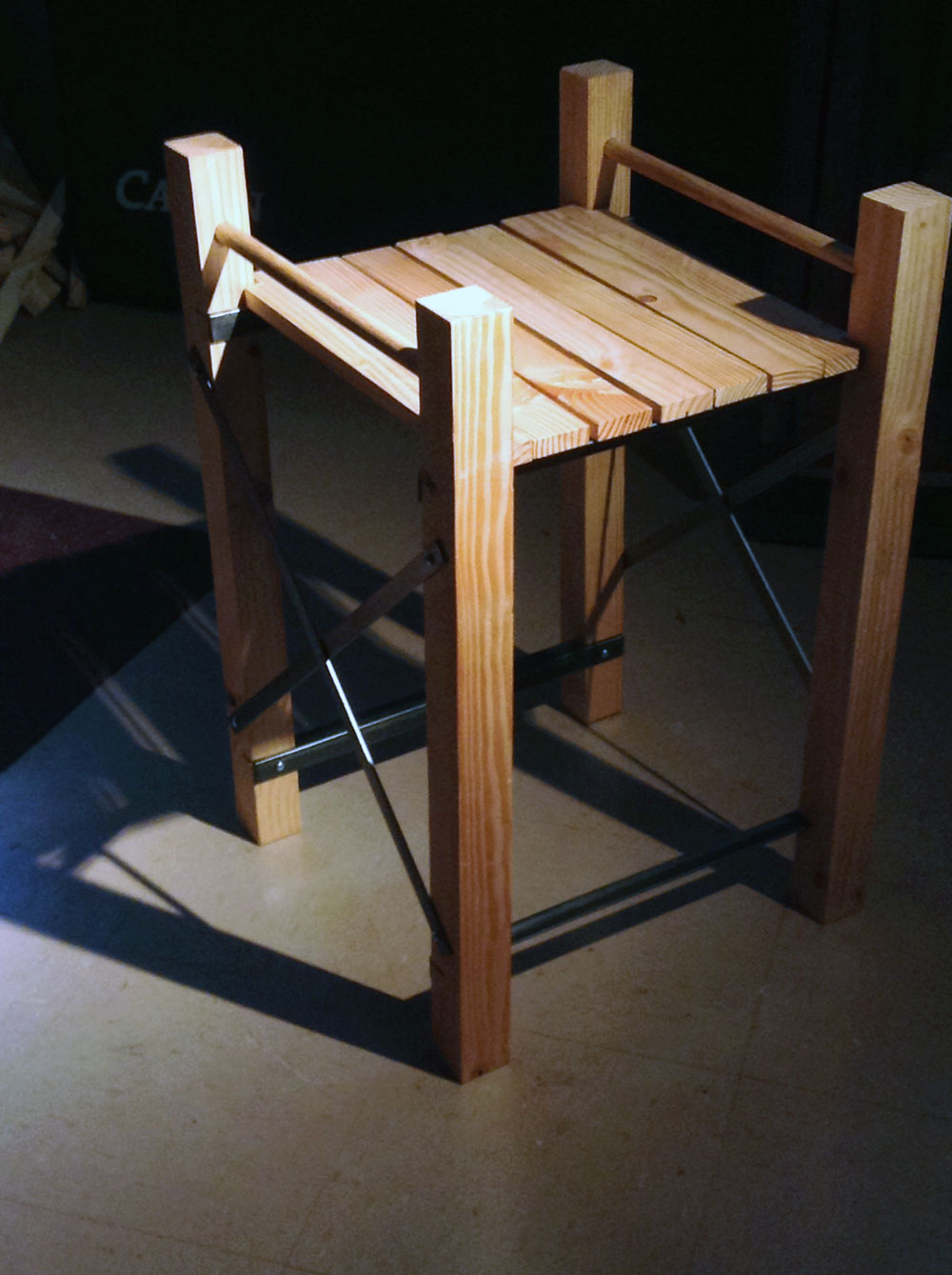